Up to now most monopile covers, which protect the airtight platform inside the monopile, have been made of aluminum or steel. None of these covers have been reused for new offshore wind farms and recycling steel and aluminum specifically is an energy consuming process. A third variant is a tent cover which also has disadvantages. At high wind speeds there is a risk that they are blown away, contaminate the sea and leave the monopile unprotected.

Wind farm developer Vattenfall asked Sif, which has been granted the assignment to build the monopiles, to come up with a smart and environmentally friendly solution for the monopile covers. Quickly the ball started rolling and Enersea, Theuws and Kansen Voor West got involved and joined forces. Together a first concept was developed which resembles an ingenious birthday cake.

The construction consists of different fiber reinforced polyester panels and looks a little bit like pieces in a pie. ‘It was not the first material we thought of’, Christian Larsen, project engineer for Vattenfall at HKZ, admits. ‘But we wanted a new and sustainable concept and gave our subcontractors the freedom to come up with a new concept, both in terms of construction as well as in material choice.’

The idea behind the different panels is that you can reuse the top panels of the cover for every diameter of offshore monopile which is currently on the market. Top diameters of monopiles typically vary between 6 and 8m and the concept perfectly matches for those diameters. The MP covers can be tailor made by using longer or shorter parts on the slope in order to adjust to the exact diameter of the monopile in a new project.

A next step in the process was to develop a first prototype. Enersea asked colleague engineering company Femto to carry out the Finite Element Analysis as Femto is more specialised in strengths calculations on composite materials. Subsequently Enersea, Femto and Theuws together developed the detailed design which led to the first prototype.

At the Theuws yard in Wieringerwerf a functional inspection and water test was carried out with positive results mid June 2020. End June further tests took place at Sif’s terminal at Maasvlakte 2 in Rotterdam. This time the cover was mounted on a mock up monopile so the complete construction could be tested on functionality, load resistance, water tightness and several other aspects. Also here the test outcome was very promising.

Vattenfall will start the construction of HKZ in June 2021. Only eight months to go to optimise this MP cover prototype, get into serial production and have the first 41 covers ready for installation. 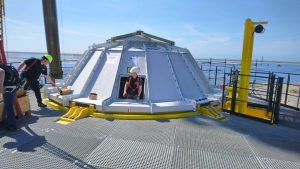 In Ocean Energy Resources magazine an article was published about this innovation. Click https://issuu.com/offshorevisie/docs/oer-3-2020issuu for the full story, pages 4-8.